The Jamnyo of Jeju, The Women Divers of Korea and Neo-Confucianism, A Dual Mythology

On Jeju Island, located off the southern tip of the Korean Peninsula, jamnyo(women divers) meet in the early morning on the shore to enter the sea together. Fifteen days per month, they carry out this ritual of free diving, risking their life, staying in the water for between four and seven hours to support their families.

Through the study of the kinship-exchange system (kwendang), and the community and value system of the jamnyo,the anthropologist Ok-Kyung Pak describes and analyses a society «centred on women» in which the women divers’ shamanic rituals for the sea goddess, who offers them her protection, coexist with the influence of the mainland’s neo-Confucianism. In addition, she traces the various steps leading to the formation of this social model promoting the protection of and the symbiosis with nature. This study is all the more relevant as the number of jamnyo divers is shrinking, due to industrial development and the oceans pollution. 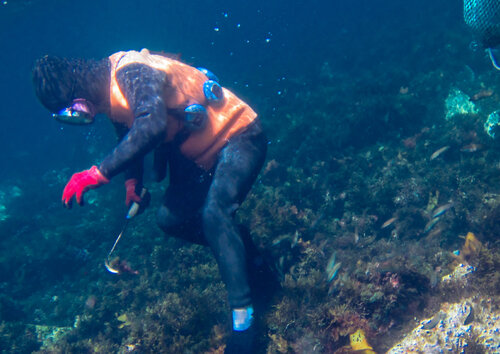 The Island of Jeju is little known to the outside world. It abounds with countless myths and shamanic epics, with 18,000 gods and goddesses and 346 shrines, where 68% of which are for worshiping goddesses.
Jeju is famous for its “three abundant entities” (samda) – women, wind and rocks. Being a volcanic island, it is covered with rocks above and below the ground, producing extremely dry land. Exposed to the sea on all sides, the island is often shaken and washed by strong winds and storms. Life on the island – the human habitat, the vegetation and economic activities- has been a struggle against the wind. Jeju men who went out to sea for fishing were often drowned, which resulted in an abundance of women and a shortage of men on the island until recently[1]. In sum, the famous “three abundances” of the Island meant that it is women who had to bear the burden of life and cope with the harshness of the environment in the near absence of men. The symbolic representation of such Jeju women is “sea women” or “women divers” (haenyoor jamnyo), who dive into the sea everyday not knowing if they will come out alive. They are referred to as the women who travel between “this land” and “that land” (the land of death). The patron goddess of the women divers is the giant goddess called Seolmundae Halmang (grandmother). According to Jeju creation myth, it is Seolmundae Grandmother who created the island. The creation myth has five stories, which tell how the Island was created. These are about the geography of the island, how the goddess tried to connect the island with the mainland, and how she coped with the famine on the island. The struggle of the giant goddess and the largeness of her spirit and courage are rather similar to those of haenyodivers.

Decreasing number of jamnyodivers and disappearance of their culture
In present Jeju, caught in a fast pace of modernization and the development of tourism, the population of women divers is rapidly disappearing, as well as the image of the giant goddess. In 2012, only 4702 divers remained, and 90% of them were over 50 years old. In 1969 there were 20,832 divers. 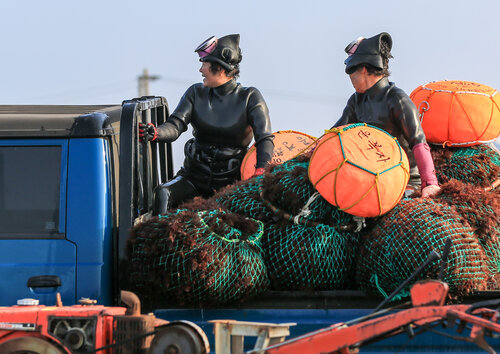 Jamnyodivers back from a dive. after diving. Photo Koh Sung-Mi.

Along with the population of divers, their culture and value systems are also disappearing, quite different from those of the mainland (peninsula). Haenyoculture entails an egalitarian and women centred social organization, with a human-nature symbiosis model. It is a great surprise to discover the existence of such a small pocket of an alien culture with a female creation myth and women centred society in Korea, which is deeply entrenched in Confucian ideology and known as a staunch patriarchal society.
It is not surprising, then, that the proponents of the conservation of Jeju culture and identity are alarmed by the present situation. Jeju Stone Park (with a 300 ha of land) has been constructed to commemorate the Seolmundae Halmang creation myth and to remind the younger generation of their female ancestors. Many monuments such as Haenyo Museum and Haenyo Summer School are being built and Haenyosongs are being recorded and archived at the university [2]. Folklorization of haenyoculture is on the increase. Many books have been published documenting divers’ life. However, all of these records are collections of data with little analysis and they are mostly in the Korean language. Therefore I feel that it is urgent to let the world know of this intangible heritage of women divers of Jeju which is being lost.