The Jiye of South Sudan

This book focuses on the Jiye people and their closest neighbours, the Toposa. The Jiye population is less than eight thousand, which makes it one of the smallest groups in that part of South Sudan. It is a particularly resilient society, which, over the two centuries of its existence, has survived periods of extreme droughts and famines, severe cattle diseases and periods of devastating raids by their more powerful neighbours. Not much has changed since then …

The south-eastern corner of South Sudan, the newest country in the world, used to be labelled the “Great Thirst”. It is a remote area marked by a low, and above all, unpredictable annual rainfall. Early Western explorers in the late nineteenth and early twentieth centuries rushed through the region from one water point to another, barely pausing to get to know its inhabitants. The Jiye, Toposa, Murle and Nyangatom continue to be relatively unknown, and although some NGOs started working in the area, little attention is paid to the cultural diversity and the social structure of these agro-pastoralist societies whose economy is mainly based upon a mixture of pastoralism and agriculture, whenever and wherever the latter is possible.

PRÉSENTATION OF THE JIYE OF SOUTH SUDAN BY GUSTAAF VERSWIJVER

The Jiye are pastoralists. They are part of the so-called Karamojong Cluster, a set of societies with which they acknowledge a tradition of common origin, speak dialects of a single language, follow similar modes of livelihood, and display, predominantly, similar social institutions. 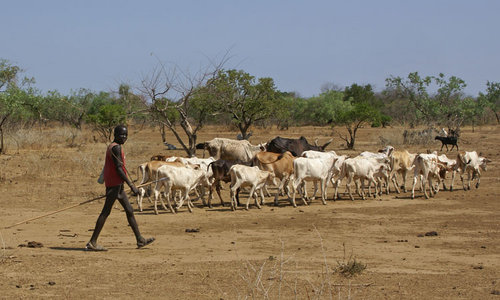 They are the neighbours of the culturally and linguistically very closely related Nyangatom and Toposa (who live to their south), and of the Murle in the north who are not as closely related. Since at least one century now, the core of the Jiye habitat is situated in the vicinity of the Kassangor Hills, on the border between the Kapoeta and Jonglei Districts (East Equatoria Province, South Sudan). Data on the Jiye population are scant and even more contradictory. The WHO advances a total population of 52.000 but that is definitely an overestimation. Having personally visited all main Jiye villages during brief ethnographic surveys in the period 2006 – 2009, I premise that Jiye population does not exceed 12.000 people. They are as such a small group surrounded by demographically stronger populations (Toposa 180.000; Nyangatom 25.000; Murle 80.000). Almost nothing is known about the history of the Jiye, except that somewhere in the eighteenth or so, they separated from the Ugandan Jie. No study has ever been made of the Sudanese Jiye. In fact, up to very recently, the administration in Sudan did not really consider the Jiye as a separate people but rather considered them as a section of the Toposa.

Jiye as an endangered culture

The Jiye greatly suffered under the effects of the second civil war in Sudan (1983-2005), mainly because their area was located on the crossroad between the areas occupied by the Southern and Northern armies. In addition, the increased frequency of periods of drought among the Turkana in Northwestern Kenya, also affects the Jiye. The increased attacks of the Turkana on their northern neighbours, the Toposa, result in a domino effect in which the Turkana push the Toposa who push the Jiye who are forced to push into Murle-land. At the same time, the rapid population increase of the Toposa leads to an ever greater number of Toposa moving eastward to settle around the Moruankipi Hills. The recent establishment of three mission stations in that area serves as an additional attraction pole. As such, the Toposa are now preventing the Jiye access to the Kurun River area, one of their most important grazing areas. The effects of the civil war and of the constant attacks by the powerful Toposa have weakened the Jiye. A 2002 study shows that in the period 1983-2002, the subsistence pattern of the Jiye changed profoundly, now depending more on hunting (+ 20%) and less on livestock (- 15%) then before the second Sudanese civil war. 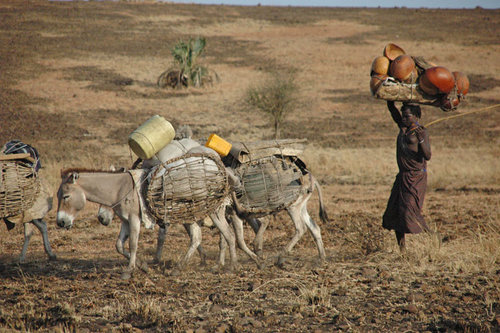 Move at the time of a seasonal migration. Photo Kyra Verswijver.

But the pressure on the Jiye during the last decades has also caused a rift between the Jiye territorial sections, where two sections left the traditional habitat and have sought refuge in a place called Boma, an area dominated by the Sudanese Murle. Temporary ‘out-migrations’ is a quite common adaptive response to periods of extreme harshness, and accounts of the Jiye show that they used to temporarily move towards Boma whenever struck by harsh droughts, invariably returning to their core area as soon as the situation stabilized. Things are different now because the migrant Jiye have lived in the Boma area for ten years already. It is clear that, although being exploited by the Murle, the Boma Jiye prefer an alliance with the culturally and linguistically more distant Murle than with their closer kin, the Toposa. The other two Jiye territorial sections that have remained in the area south of the Kassangor Hills, are on the verge of being incorporated into the Toposa, ‘Jiye by clan, but Toposa by tribe’. The weak position of the Jiye is aggravated by the local policy where both the Toposa and Murle have control over the local administration and hence also on all kinds of assistance that may be given in the area.
In sum, it is clear that Jiye culture is rapidly changing and that their identity is compromised at the long term ― a process that is fostered by national politicians.

Sorghum processing in front of the residential hut (with the granaries in the background). Photo Martine de Roeck. 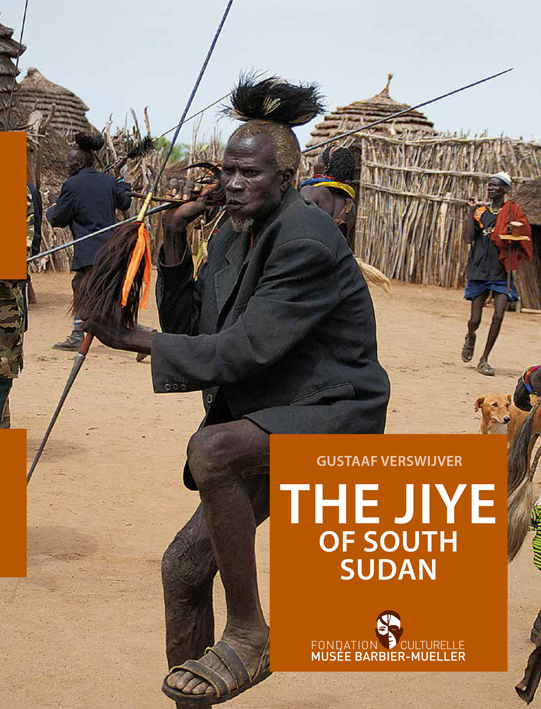